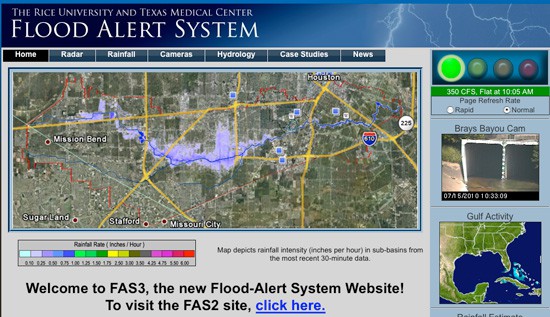 Australia has recently experienced extreme flood impacts due an extraordinarily wet spring-summer period, particularly in SE Australia.  Over the September 2010 to January 2011 period Water Technology was actively involved in flood response management during the Victorian flood crisis. Working alongside the SES and other agencies has provided valuable insight for our staff on the requirements of flood intelligence systems including the prediction of flood extents, depths and timing.  The ability to rapidly and conveniently communicate this information to an array of stakeholders across wide areas is a significant challenge and something that is presently available.  Over the past decade Water Technology has prepared numerous flood studies across regional Australia incorporating detailed flood maps, primarily to inform the land-use planning process, although these maps are also useful for flood response when linked with appropriate flood warnings.

As a company we strongly support the development of an interactive web based system that utilises hydraulic model-derived flood extent data for the management of flood planning and response. Such a system, Floodzoom, has recently been put forward by the Victorian State Government;  Victorian Government to repair and expand flood warning network.

A web based flood mapping tool such as Floodzoom would link property and inundation information to a background database which is then presented in an interactive, graphical web-page format.  Such a system would aim to improve emergency response planning before a flood event, and operations during a flood event. It would be envisaged that it would enable users to visually interrogate the catalogue of study areas and associated simulations of flood events, to spatially visualise flood risk, and for distributing flood event data to users requiring more sophisticated analysis. Flood animations could be viewed to gain an insight to flood movement. The use of a web-based application interface removes the need of local installation of expensive and complex commercial software, or the need for specific software expertise. The web-based format of the interface allows access for a variety of stakeholders including relevant agencies to examine the flood movement, and can also be delivered on smart phone devices.

There are examples on how web-based flood response technologies have been used within Australia and overseas. X.H.Wang of the University of Cincinnati prepared a paper on the usefulness of such a system in 2003 ”An Internet Based Flood Warning System” whilst Water Technology and Environmental Systems Solutions were commissioned by the Victorian Government to develop FloodZone for the Shepparton-Mooroopna and Nathalia townships: http://www.watech.com.au/capbilities/floodplain-management/floodzone-web-based-flood-mapping

These prototypes have been available for some time, however there was understandable reluctance to invest in such tools during a period of extreme drought over the past decade when needs and priorities lay elsewhere.  With the enormous human and financial cost of flooding fresh in the minds of the community there is an opportunity for a significant step forward in flood planning and response systems.